Like a knife
That you’d thrust back into a wound
And twist around
You own
The key to my heart,
Will you close me up
Or tear me apart?

His eyes were sparkling and he was chanting a sad song about fleshy tasty cold raw fish and “the precious, the precious is ours!” he’d say but there was no-one else there. So he replied to himself and he would spend days having conversations alone.
I wanted to be his friend but as soon as I would approach he would snarl and spit and drive me away with curses until he thought he was alone and could revel in the illusion of happiness he had created for himself.

“Where did you find it?” I asked him once.
“Where did we find it precious?” He inquired of himself before getting that sad and selfish look again and saying “mustn’t ask us, mustn’t ask it of us, go away!”
And then he would start singing again:
“Fresh cold juicy fish… Snap snap snap!…”

But then he came. The baggins. Never trust bagginses, never again. It stole the light, the gold, the precious, and my gollum was left all alone alone without light, without hope, without relief in this dark desolate world.
Suddenly I knew I could be his light, so I stepped in and I was his hope for a while, until he remembered that horrible object that had been stolen from him and he howled and wailed and cursed me. On that day I decided that I would kill all bagginses, all hobbiteses, and everything else so that all that would be left would be me and my gollum and no-one to hurt him.
So I left and whispered in the ears of uncertain men, my favourite puppet was named “Saruman”. Through him I could even influence the great destroyer Sauron and the world could be ours…

But my gollum was misguided, and the world was saved… By two hobbitses, one baggins, and my gollum fell into the most unforgiving lava with his precious where I could never reach him again. And I swore that I would haunt this baggins, he would never find a home, always be an outsider, always be alone, always.

Sneakily creeping up on you
It’s never where it’s heard,
It’s hard to ever find out where
This strangest one does go.
Is it here does it go there?
Why does it always make it hard
To speak or write or read?

It’s always there but when it’s not
It’s always never heard,
What e’er singularity were
Like the ever silent K?

In my next poem I intend to speak of the letters W and Z… :p

My mother violently swings my bed open to wake me up. I realise that my desk didn’t ring and I’m late for my alarm! I jump out of my cupboard and yank open my house to get dressed, before leaving I check the door to see if I haven’t forgotten anything before running down out of the station with a train in my hand. I finally get to the cereal bar and jump on a school before it leaves. Then I run down the teacher and up the class and finally get outside but the road tells me I’m too late and to wait in bed.
I should have stayed on the stairs…

Watch out I’ve run into some terrible swippy-swappers: sentences that swap monsters around in words…
😉

Grey winter sky
Like ashes.
So many people parading in the streets
Not enough.
Big words of liberty an unity
Said too lightly.
Proving they were wrong
To dead men.
Proud hearts and minds
Following the crowds.
Call for change
Others should bring about.
Hope of great deeds to be done
Too little
Too late.
Less than half
of half
of half
of half
a country
Feels concerned. 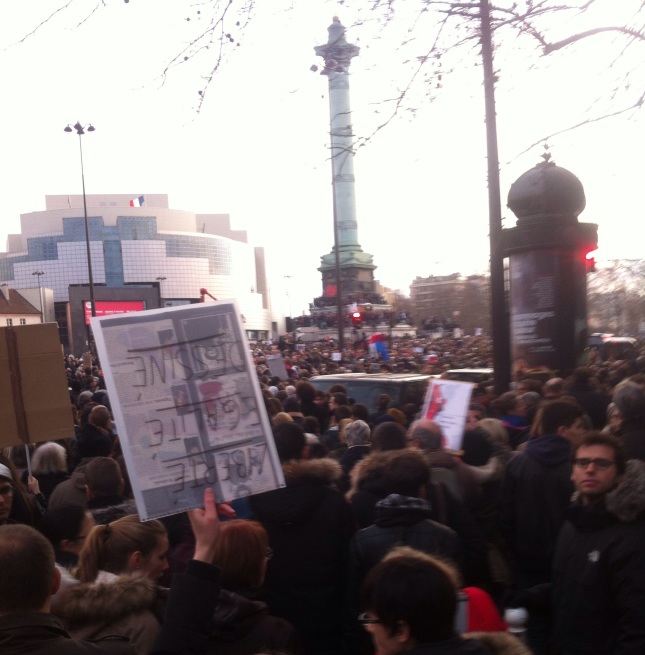 A warning: the first condescending comment about “poor old Europe or small weak France we’ll help you get out of this” will not be appreciated. (Needless to say neither will the next ones but I doubt there’ll be any right?)

I haven’t posted for a while, for numerous reasons… but I’m back at least for a while 🙂